What I learned from a towering wall of Alpine ice

Descending beneath an ice wall on the Parrotspitze.

Mountaineer Joe Simpson called it ‘the beckoning silence of high places’ – the lure that pulls people to the mountains, often to their most dangerous spots.

I’ve been to few places higher, or more silent, than the icy glacier that sits atop the Monte Rosa massif, the mountain chain which borders Switzerland and Italy, a sea of ice flowing down a frozen valley beneath the peaks of the Dufourspitze, Zumsteinspitze and Parrotspitze.

Six years ago this week I traversed the massif, climbing eight peaks in five days and pushing myself to limits I wasn’t even aware of.

Over the course of the week I came dangerously close to losing a glove in high winds on the Zumsteinspitze, assisted in bringing a fellow climber down after he was struck with altitude sickness, and – the payoff for repeated endurance tests – witnessed a series of incredible summit vistas.

I also took not-insignificant risks, one of which is pictured above. The picture was snapped as I descended from the Signalkuppe (4,554m), travelling by a hanging serac wall under the Parrotspitze (4,432m).

At the time the huge mass of ice above barely registered, despite it being mid-afternoon and a dangerous time for avalanches. I’d been climbing for 12 hours. Like the other members of the small group I was with, I just wanted to get down – and the route under the Parrotspitze was the most direct way.

In fact, given my tiredness, light supplies and the hour of the day it was the only option.

Perhaps that’s why the danger never registered at the time – when you’ve a single route forward and no way back it’s pointless to dwell on a concept like risk (or tiredness, or freezing feet, or an unquenchable thirst and a very finite amount of water in your flask).

Afterwards – if there’s an afterwards – you applaud yourself for your bravery, or dig up your photograph and write about it all.

I’m reluctant to draw life lessons from trips to the mountains, but when the Monte Rosa picture popped up on a social media feed this week it occurred to me that risk is a phenomenon that takes up as much space as you allow it to.

If you’re on a single path, to a single destination, it becomes – as it was under the Parrotspitze – simply part of the landscape.

‘The beckoning silence of great height’

Irish climber Ger McDonnell died in the Death Zone on K2 on August 2, 2008, most likely in an avalanche of ice from a falling serac.

I remember where I was that day – working the newsdesk of a paper in Dublin.

The afternoon was spent urgently checking web reports from climbing parties at K2’s basecamp and trying to contact McDonnell’s friends and family.

Verifiable information was scant that first day and would continue to be in the months after.

What occurred on ‘the Savage Mountain’ over the course of 48 hours that August weekend proved to be a story of information and lack of information, accurate and inaccurate reports, of blurred recollections.

When deadline arrived in Dublin that night McDonnell was missing, presumed dead. Witnesses later reported seeing him being struck by a devastating icefall that day.

In the hours, days, weeks and months afterwards the story of what exactly happened to the 37-year-old has been the subject of TV interviews, online and print media reports, more than one book and now a documentary feature film, The Summit, released in Ireland today.

Most of the ‘McDonnell on K2’ stories focus, understandably, on his desperate final hours and the aftermath of his death. 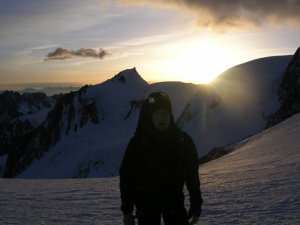 But what of the years, months and days that led him to this remote mountain and his summit push of August 1, 2008?

Why did this engineer leave a partner in Alaska and family back in Ireland to climb a peak which boasts a fearsome fatality rate, killing , some say, one in every four of those who attempt it?

Just two years earlier McDonnell was medivacked off K2 after being and injured by a falling rock. Surely once was enough?

What brought McDonnell back? The easy answer might ascribe his 2008 attempt to a competitive nature, a desire to knock the mountain off. Or, having already climbed Everest, a desire to stand on the second highest summit or Earth.

But I imagine the main factor at play was evident in a matter-of-fact comment by his brother-in-law Damien O’Brien – that McDonnell “did it for the love of it”.

This is a feeling common to any mountaineer, climber or hillwalker, whether on K2 or Croagh Patrick.

It ranges from the ‘earth beneath your feet’ feeling of a short weekend hike to the mind-clearing, elemental vistas of dawn breaking over the rim of world seen from a 5,000m summit.

Joe Simpson dubbed this draw the ‘beckoning silence of great height’, a description of a  sensation that is both a physical experience and an all-encompassing psychological lure.

In my own (limited) mountaineering experience this feeling can be tempered with anything from a Zen-like bliss to icy fear – and it lasts long after you’ve departed the peak.

I’ve found it stronger in moments of quiet or solitude, at dawn or at the foot of the mountain, in memory or anticipation, than in the exhilaration of summiting itself.

Perhaps this is the feeling that led Ger McDonnell back to K2 in the summer of 2008.

I like to imagine it was and that something of it remains where he lies to this day, up there amid the great heights of the Karakoram.