The Beatles’ White Album contains a great many things for me. The proto-punk of “Helter Skelter”, the arpeggio wonder that is “Blackbird”, John Lennon’s heartfelt song to his absent mother, “Julia”.

And then there’s “Revolution 9”, the musique concrète sound collage that I only listened to for the first time in full this past week.

But, after almost three decades of listening and distilling the double album – the 50th anniversary of which falls later this month – what stands out to me, first and foremost, is George Harrison’s songwriting. Specifically, his two songs “While My Guitar Gently Weeps” and “Long, Long, Long”.

While the rest of the White Album sways from musical beauty to discordant freak-out to music hall fluff – often in the course of a couple of songs – these two Harrison tracks appear as something different, music on and from a different level (given “Long, Long, Long’s” genesis in Indian meditation practices, perhaps “transcendent” is the word).

Both have been written over at length (my favored account of each is contained in Ian McDonald’s classic “Revolution In The Head“), as has the White Album itself, not least because a newly-remastered, bells ‘n’ whistles release is in the offing.

Whatever makes you happy, lads

Can you hear it? Thom Yorke. Pic: Yasuko Otani

Reports that Radiohead’s publishers plan to sue Lana Del Rey for plagiarizing the song ‘Creep’ are – like the band themselves – a bit rich.

Not least because ‘Creep’ was written – not by Radiohead – but by two Seventies’ songwriters, Albert Hammond and Mike Hazlewood.

Or parts of it, at least – specifically the parts that led Hammond and Hazlewood to themselves successfully sue Thom Yorke and Co. in the Nineties, alleging similarity to their soft-rock classic ‘The Air That I Breathe’. (The pair later secured themselves a spot on the song’s credits.)

Just as there’s little new under the sun in music, so there appears to be little new in music litigation – with Radiohead now adopting the Hammond/Hazlewood playbook to pursue Del Rey, claiming her ‘Get Free’ uses “musical elements” found in ‘Creep’.

For their part, the Oxford outfit – or their publishers at least – have refuted reports of a lawsuit per se, but have confirmed that they have been in “discussions” with Del Rey’s representatives since last August. Read: we’re seeking a few bucks.

If Del Rey feels like coughing up in this regard, perhaps she should skip the alt-rock middlemen altogether and throw a few dollars the way of the two original songwriters? Just a thought.

That’s unlikely though, as the singer says her people will deal with the matter in court. And how much does it cost to ‘Get Free’? Given that similar settlements have run into the hundreds of thousands of dollars it could be an expensive outing.

Accentuate the positive, though. If nothing else, this minor side-alley music spat has brought me back to The Hollies’ version of ‘The Air That I Breathe’  – a perfect AOR start to 2018. And, thanks to YouTube, effectively free – but that’s another conversation.

Reaching the dizzy heights of Hollywood 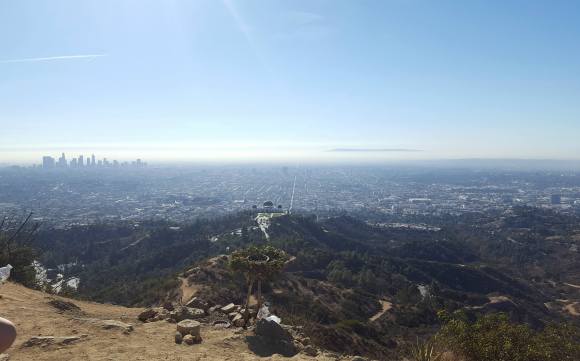 The view south from summit of Mount Hollywood

It isn’t the biggest mountain I’ve climbed, but it’s probably the most glitzy.

The clue’s in the name. Mount Hollywood sits among the hills in Griffith Park in Los Angeles, overlooking the famous ‘Hollywood’ sign and within squinting distance of film stars’ luxury pads.

It has to-the-horizon views of the metropolis of L.A., including its downtown and, to the southwest, the waters of the Pacific and Catalina Island. Just beneath the summit lies Griffith Observatory, a stunning 1930s landmark, itself perched high above the city.

Even the trailhead itself has a little showbiz sparkle – hikers take their first steps past the George Harrison tree. (The second of its type, after the first died following an onslaught by beetles in 2014 – I kid you not).

It’s not all glamour though. The four mile (with diversions) round trip up and down the Mount Hollywood Summit trail is a dusty outing and, on many days, the views are obscured by the city’s notorious smog. Beware the heat too – hiking it last weekend meant temperatures in the low 80s, even near the summit saddle, and a searing sun, with zero foliage cover.

That said, for someone who’s spent most of his hiking hours in rainy Ireland or soggy Oregon, the hot, blue sky was a welcome relief.  The heat was also worth enduring for the scenic payback that followed a 45-minute workout, and 262m ascent, up the trail.

In recent years I’ve hiked a number of the popular routes in L.A. – traversing trails in the San Gabriel Mountains, Debs Park, and Topanga State Park. Each has its own charms, but Mount Hollywood is the best all-rounder for taking in the view and vibe of the city.

It won’t tax a hardened outdoors person, and fitness freaks will prefer to jog rather than walk, but it’s worth braving the  hordes who start from the Charlie Turner trailhead, near Griffith Observatory, each Saturday morning. Just bring some water – and a camera for that photo.

Dylan and the art of doing nothing

Another self portrait (Looney).

MY automated to-do list usually kicks in at about 6am. In fact, it usually wakes me.

I lie in the Philip Larkin pre-dawn working through my planned tasks before gradually hauling myself up and into another day.

This happens on work days, on non-work days, on holidays. This morning, driving to the train station, my wife pointed out that I even manage to obsess about things I have to do on a day, like this, when I really don’t have to do anything.

And doing nothing, at the right time and in the right place, is just as important to me as doing something.

That’s why I crave the mornings when I wake and realise that my mental diary’s been closed overnight, that my mind and the hours ahead are clear.

With this clarity comes rest and with this rest comes peace of mind.

Bob Dylan achieved this peace of mind, albeit briefly.

Waking early and at ease one morning last week I rose, walked into the sitting room, and turned on the stereo.

The most recent Dylan release, a bootleg series issue called Another Self Portrait, is made up of songs written when he was, to the public at least, living the life of a recluse in the Catskill Mountains.

The bulk of the collection’s 35 songs were either rehearsed or written in this period, in 1968 and early 1969, and recorded in New York City in 1970 when Dylan returned to live there.

Another Self Portrait (Dylan).

Most are covers, something Dylan was criticised for when he included other versions of the same songs on his 1970 album Self Portrait.

Hearing these songs now though, at a remove of more than 40 years and in a digital age inconceivably different to the era of their recording, the listener is struck by a mood of peace and rest.

This feeling is most apparent on Time Passes Slowly #1, an early version of a track that appears on the album New Morning.

Dylan’s languid vocal is Walden-in-Woodstock. “Time passes slowly up here in the mountains,” is his entry line.

Having no reason to go anywhere that morning I laid on the sofa and listened to half of Another Self Portrait. I encountered Railroad Bill (“never worked and he never will”), Thirsty Boots (“take off your thirsty boots and stay for awhile”) and All The Tired Horses (“in the sun”).

Much of this was and is beautiful art, offering everything except urgency.

That most of it was conceived during a period of apparent R&R for Dylan offers a lesson in how the best work can be done when the mental diary is cleared, or binned.

Or as the self portraitist puts it: “time passes slowly when you’re lost in a dream”.