Hiking the ‘geography of hope’ 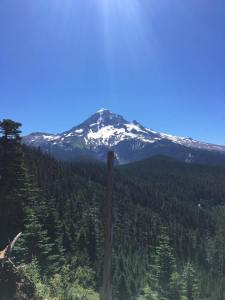 “We simply need wild country available to us, even if we never do more than drive to its edge and look in. For it can be a means of reassuring ourselves of our sanity as creatures, a part of the geography of hope.”

So wrote the novelist Wallace Stegner in 1960, in an appeal to a U.S. government official involved in a policy review of America’s ‘Outdoor Recreation Resources’.

Stegner’s point seems self-evident 60 years later. In 2017, after hundreds of years of human erosion of natural resources, the wild country in public ownership is clearly worth more than its simple economic value.

While this is clear to many – particularly those who’ve visited a national park – the country’s current president may take some convincing. Meanwhile, hope seems thin on the ground these days.

But, as Stegner argued, it’s still there – for now. With this in mind we recently travelled from our home in urban north Portland’s to the Mount Hood National Forest, and specifically to the Lolo Pass Trailhead, a waypoint on the Pacific Crest Trail (PCT).

From there, my wife and I hiked the PCT for a couple of hours, before turning off on the Timberline Trail, which we cut away from to ascend Bald Mountain.

In the course of the hike we met a handful of people, who quickly passed with a nod; at times, we seemed to be the only people standing beneath the gargantuan west face of Mount Hood above us. The higher we hiked, the quieter the undergrowth sounded – even the fauna appeared to clear the way.

We felt, to borrow another phrase from Stegner, “single, separate, vertical and individual in the world, part of the environment of trees and rocks and soil, brother to the other animals…”

After months in the cities, and traffic, living with ambient freeway noise outside our home and multiple screens within, the hours also felt like ‘sanity restored’. 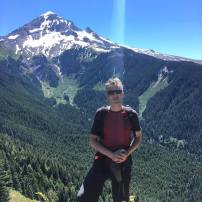 We ate our lunch yards from Bald Mountain’s summit, where the only imprint of civilization was the few stone remnants of a 1930s fire lookout, facing the huge hanging glaciers on Mount Hood. The scale of the view was vast and silencing; our meal over, we sat and breathed and just looked on, a part of the landscape ourselves.

Having hiked in Europe, the British Isles, and Ireland, I’ve long been familiar with the restorative powers of the outdoors – whether in a blizzard on Ben Nevis, crossing a sun-bleached glacier on the Monte Rosa, or on sunny moorland in the Wicklow Mountains.

I still agree with the elderly man I met when descending Croagh Patrick in heavy weather on a November afternoon, who shouted to me above the wind: “It’s good for the soul!”

It was, and it still is. The wild places – to borrow a term from Robert Mcfarlane – remain repositories of peace, beauty, and natural communion. But they’re also places of hope – regions that remind us that – despite everything else that confronts us in 2017 – we’re still part of something awe-inspiring. For now, at least.

A nightmare from which I’m trying to awake

“- I just wanted to say,” he said. “Ireland, they say, has the honour of being the only country which never persecuted the jews. Do you know that? No. And do you know why?”

He frowned sternly on the bright air.

“- Because she never let them in,” Mr. Deasy said solemnly.

By a curious twist I read these words this morning, on a day of protests and court applications and outrage in the United States.

They are from the ‘Nestor’ episode of James Joyce’s novel “Ulysses”, spoken to Stephen Dedalus by the small-minded headmaster Deasy. And spoken with great animation – Deasy has just chased a departing Dedalus to the school-gate to stress his anti-Semitic argument.

The words sum up a petty bigotry that, Joyce suggests, was to be found among sections of Dublin’s middle class a century ago. The sentiments can of course be found against another religion, in another country, 100 years later.

And so Joyce’s novel, published in 1922, is – among many other things – a fitting read for the times we’re in.

The book is a work of immigration. The author wrote it in self-imposed exile; having departed Dublin in 1904, his peripatetic lifestyle led him to Trieste, Zurich and Paris. One of the main reasons for this exile was the burgeoning Irish nationalist movement, nationalism being, as Dedalus famously points out to Deasy, one of “those big words…that make us so unhappy”.

Immigration, religion (another of Dedalus’ big words), and their effects down the generations are central to the novel, principally by way of Leopold Bloom. The book’s central character,  Bloom is the son of a Hungarian Jew who emigrated to Ireland and converted to Protestantism.

Despite Bloom’s own conversion to Catholicism, he encounters an ingrained, nod-and-wink anti-Semitism as he navigates his way around Dublin on June 16, 1904. At one point The Citizen – a nationalist and xenophobe – talks, in Bloom’s company, of Jews “swindling peasants… and the poor of Ireland. We want no more strangers in our house”.

Bloom retains his composure in the face of such bigotry. His thinking, his behaviour, and his dignity represent Joyce’s riposte to the forces of religion, colonialism (by way of England) and nationalism.

Bloom is a true citizen, a pacifist, a Dubliner with a Jewish background, an individual who is a man first, an Irishman second. He may feel conflicted at times, but this is the price of his virtue of moderation.

Bloom doesn’t make an appearance in the ‘Nestor’ episode, and so does not hear his young friend Dedalus utter one of the most resonant lines in “Ulysses”:

History, Stephen said, is a nightmare from which I am trying to awake.

As many might suggest, this can apply to the present too.
_____ 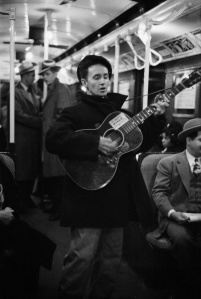 On an afternoon in February 1940 a songwriter, tired of what he saw as the blind patriotism of the then radio staple “God Bless America“, sat down in his New York City hotel room and typed out a series of verses that he’d worked on over the preceding months.

The writer was Woody Guthrie and the result was his most famous song, “This Land Is Your Land” (which he’d originally, and sarcastically, titled “God Blessed America For Me”).

In the 80 or so years since, the song and its lyrics have become some of the best known and most sung lines in the American songbook.

But “This Land” was a slow starter. Having written the song Guthrie sat on it for four years, during which time he performed around New York city, including on the subway (above), and served in the U.S. Merchant Marine. When he returned to the song to record it, in 1944, he dropped two hard-hitting verses, one concerning private property and the other hunger.

(The latter was the most biting verse in the song, containing the lines “one bright sunny morning in the shadow of the steeple, by the Relief Office I saw my people, as they stood hungry, I stood there wondering, if this land was made for you and me?”)

This was unsurprising perhaps. After four years of war Guthrie no doubt felt the need to cast his song, written in anger, in a more unifying light. And so the version he recorded for Moses Asch in March 1944  is one laced with hope.

On the day that’s in it, hours before a new and divisive president is inaugurated in Washington, D.C., its lyrics are worth reading. Because if you can’t keep the hoping machine running, what can you do?

This land is your land, this land is my land
From California to the New York Island
From the Redwood Forest to the Gulf Stream waters
This land was made for you and me.

As I was walking that ribbon of highway
I saw above me that endless skyway
I saw below me that golden valley
This land was made for you and me.

I roamed and I rambled and I followed my footsteps
To the sparkling sands of her diamond deserts
While all around me a voice was sounding
This land was made for you and me.

When the sun came shining, and I was strolling
And the wheat fields waving and the dust clouds rolling
A voice was chanting, As the fog was lifting,
This land was made for you and me.

This land is your land, this land is my land
From California to the New York Island
From the Redwood Forest to the Gulf Stream waters
This land was made for you and me.

A 70-year-old note to a new President

Amid the rancor, shock, violence and triumphalism of recent days I’ve been thinking about one American, whose vision of the country stands in bold relief to much of what I’ve read and heard in recent months.

Woody Guthrie wasn’t bound for glory as a progressive hero – not at first, paper at any rate. He was the son of a Texas landowner. His father was involved in the lynching of two people and was, Guthrie later alleged, a member of the Ku Klux Klan.

The young Woody would stand with his father while the latter, who was involved in 1920s Oklahoma politics as a conservative Democrat, gave stump speeches.

That’s where ‘official’ politics ended for Guthrie, however. In 1931, aged 19 and an aspiring songwriter, he set out from Texas for California. Over the next three decades he would travel and work all over the United States, appearing on radio in LA, recording for Moses Asch in New York City, and penning songs for the Bonneville Power Administration in Portland, Oregon.

In the process he would write hundreds of songs, including one about the father of our current President-Elect. More famously, his “This Land Is Your Land” has become something of an alternative national anthem. Other songs – “Do Re Mi”, “Pastures of Plenty”, “So Long It’s Been Good To Know Ya”, have seeped into the cultural consciousness.

This week, though, I’ve been listening to a song Guthrie wrote but never recorded. In January 1948 he read in the New York Times of a plane crash in the San Joaquin Valley in central California. Twenty-eight migrant farm workers, who were accompanied by four Americans, died when the plane transporting them back to Mexican crashed.

Among the song’s seven verses are the lines:
“Some of us are illegal, and some are not wanted,
Our work contract’s out and we have to move on;
Six hundred miles to that Mexican border,
They chase us like outlaws, like rustlers, like thieves.”

Plus ca change. Guthrie’s pal Pete Seeger would later popularize “Deportee”, singing it at concerts. Dozens of others have since recorded it.

In a week when a 70-year-old song has become relevant again, when phrases like “great, great walls” and “11 million illegals” are bandied around with menace, it’s worth a listen.