Standing on the beach, with a run in the sand

One of the things I miss about living in Dublin is the sea. In the two decades I spent there I was rarely farther than a 15 minute drive to the water.

In more recent years, living close to the northern shore of Dublin Bay, I could run to Dollymount Strand in 10 minutes (if I pushed it mind you, usually it took a little longer).

Since relocating to Portland, Oregon, last year, most of my running has been on the sleepy streets of North Portland, usually in the morning before traffic gets busy. It gets the job done, but it’s not quite the same as jogging along the surf line, out among the elements.

Neither is grinding out the kilometres on a treadmill, the other option in recent times (and the more sensible one, given Oregon’s weather this winter). 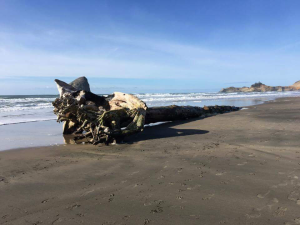 After six months of this, I’d had enough, though. And so I found myself arranging a trip with my wife to the central Oregon coast, to a small town called Pacific City. It boasts a large offshore sea stack, a huge, climbable sand dune, a famous brewery, and four miles of straight, level, sandy, beach.

And it was deserted. After months of living and working out in a city, it felt strange to be standing on sands which stretched out for four miles with nobody in sight. It may have been the time of year, or the early morning, but no-one ventured past the beach entrance (the site of the brewery’s pub – which may explain matters). And so I ran on alone, in silence.

Well, anything but silence. The roar of the ocean, whipped around by a steady north-easterly, kept me company. Once I got into the zone I was not only running in Pacific City, I was on Dollymount Strand, or Rosslare Strand, or Curracloe Beach, my favorite coastal runs back in Ireland.

Without cars, street signs, people, or a phone, one beautiful natural area is like all the others – thankfully. For 50 minutes I was out of civilization and out of time. I planned to run 5k along the beach, but I couldn’t resist pushing on.

I’ll hurt tomorrow, of course, but I’ll be back on city streets then, where – nicely lit, well paved, and without the wind and the noise – running is always a little tougher.

Taking away some of that Bull Island zen

My physiotherapist better look away now. Because this is a post about something that I really shouldn’t be doing much of but, despite all advice to the contrary, can’t give up.

It’s running. Or jogging, or slogging, or the next best word that describes my morning efforts around Bull Island.

On the mornings I can run that is. A burgeoning case of hallux limitus, a fairly common arthritic disorder that’s struck the big toe of my left foot.

A year ago I wrote about how the condition could eventually end my running altogether. Twelve months on and a canny regime of ice/walking/bicycling/rest has ensured that I can still get out for 5k twice a week. If I’m feeling utterly reckless I’ll stretch that to 10 – and pay for it afterwards.

But stopping is not an option. Most runners know the empty, distracted feeling when they miss a planned outing. Those who are injured know that they will do anything – make whatever time sacrifice, take whatever supplement, stretch whatever muscle – to get back out again.

Why? It’s not to get a physical workout – there are less painful ways to do that. It’s mental – or it certainly is in my case. When I’m off the track I miss the calming, clearing effect of a good run.

Over the years I’ve tried many things to quiet my mind. But nothing even comes close to the effect of 25 minutes running in the outdoors.

In recent weeks I’ve needed this more than ever. Planning, packing and preparing to leave Ireland has been exciting – but the flipside of the excitement, the anticipation and the bittersweet series of goodbyes has been my mind’s switch is jammed to ‘on’.

And so I’ve turned – despite the pain, which is manageable – back to jogging. Not just any jogging either, but a workout on Bull Island and Dollymount Strand, the sandspit that sits to the north of Dublin city centre.

This has been my gym in recent years, and it’s one I’ll miss. When my running ban was in effect I’d walk there, in any season and any weather.

But the best time to run in the area is on an August morning, shortly after a 6am sunrise. If you’re lucky you’ll catch dawn breaking over Howth Head, on one side, and over the city of a million slowly waking souls on the other. Most likely you’ll be alone, blank before the heavens, while your thoughts will have the decency not to intrude.

I’ve no idea where I’ll be running next month but – physios be damned – I will be. Whatever the location I do know one thing – I’ll take some of the Bull Island zen with me.

Off the edge of the sea 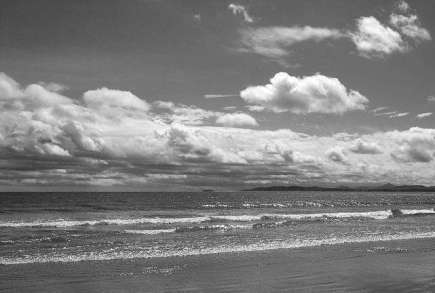 But mostly an unobtrusive grey,

They hang off the edge of the sea.

The clouds off Dollymount don’t move –

Midway from here to the Isle of Man they remain

Simply there, a reminder.

A little rain falls on all, the singer sang –

Some days it comes down, most days it doesn’t.

Almost assured of our place, the clouds don’t come to shore.