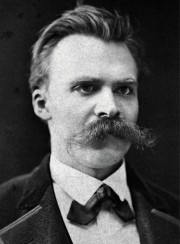 What do these four items have in common?

They’re what I need for a late Fall run in the rain. While the first three items might be familiar to most runners, I’d bet that few whip out the work of a 19th-century German philosopher before they pound the pavement.

Why should they? Because Friedrich Nietzsche’s “Ecco Homo” deals with the concept of difficulty, the area where wishful human expectations hit the wall of cold disappointing reality. That’s a familiar concept to anyone trying to knock out a sub-44 minute 10k in Portland’s October wind and rain.

Every runner knows that he or she is often just one outing away from a  difficult session – the tough day when you’re contending with nasty weather, or you don’t feel well, or your long-planned prep appears to have had little effect.

Each runner has a way of handling this. Some run through the difficulty, grinning and bearing it, while others avoid it altogether, turn over and grab an extra hour’s sleep on a Sunday morning. I’ve been both runners at different stages, usually feeling aggrieved by circumstance in the process.

“To regard states of distress in general as an objection, as something that must be abolished, is the [supreme idiocy], in a general sense a real disaster in its consequences…almost as stupid as the will to abolish bad weather,” he wrote.

(The marathon-running novelist Haruki Murakami put this another way: “Pain is inevitable. Suffering is optional”.)

The challenge is to incorporate Nietzsche’s ‘distress’ into your workout, to get up close to it and make it part of the session. Physically we can build muscle by lifting weights – why not apply the same principle to mental weight?

Like the rain, difficulty is not going away. Like the niggling pain in my ankle or the ache of a shin splint, it can’t be abolished.

Later today I’ll head out for a 30-minute run knowing that I risk aggravating my on-off plantar fasciitis. But I’ll take my training advice from the “Ecce Homo”: “Pain does not count as an objection to life”.