The meaning of life, according to a ghost

The world’s bookshelves – not to mention its places of worship – are filled with attempts to uncover the meaning of life. Not only is it hard to find (let me know if you have), it’s also hard to write about.

In terms of fiction, at least. While philosophers and the religious can deploy a chosen strategy or belief system in their attempts to pin down and formulate it, novelists have no such overt frameworks to hang their theories on.

Sometimes it’s best approached in a roundabout way. The gangster Pinkie Brown from Graham Greene’s “Brighton Rock” comes to mind in this respect, a killer whose surface actions appear to motivated by understandable criminal hatreds, but whose cold-blooded willingness to kill underlies the great empty pointlessness of his situation.

On other occasions, it’s tackled head on – the “Our nada who art in nada, nada be thy name…” lines that the narrator speaks in Ernest Hemingway’s “A Clean Well-Lighted Place“; the nothingness that the old man in the cafe in the story seeks to avoid, through brandy and company.

I recently came across a more positive – or less hopeless at least – outlook in George Saunders’ “Lincoln In The Bardo”. At its core a novel about death and bereavement, one of the main characters, a ghost who’s speaking as he’s about to ascend/descend into heaven/hell, provides as clear an account of the meaning of life as I’ve read in fiction in some time. Whether it enlightens, or provides consolation, is a different matter, of course (personally, I’ve looked to poetry for that), but it reads as good as any.

“None of it was real; nothing was real.

These and all things started as nothing, latent within a vast energy-broth, but then we named them, and loved them, and , in this way, brought them forth.

And now must lose them.”

God’s a maniac…but we really, really need him 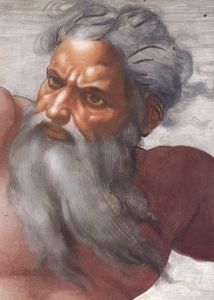 Detail from ‘ Creation of the Sun and Moon’
Michelangelo (1511)

Something similar has occured to most rational people at some point, and even to the most devout, surely, on occasion. And yet we believe.

The believers were among the many who read and shared Fry’s remarks after they were reported this week.

But the comedian missed the point somewhat. It’s not God himself, a grumpy reactionary with odd, millennia-old, moral habits and preachy ground staff that we need, it’s the comfort believing in him offers us.

How would we get up in the morning (or face what’s lies before us at any other time of the day) without a repository for our fears, a cosmic counterweight to life’s unpredictable shifts?

God is an answer to the headline terrors: fear of death, fear of illness, fear of losing loved ones. “But he allows horrible cancers to kill children,” it’s pointed out. Well, we let that go.

We know most sin is bad and that some of the Ten Commandants have merit, but we seem less interested in holy box-ticking than in having an otherwordly comfort blanket to keep the bad stuff away.

If we were guaranteed this comfort blanket we could do without the judgmental heavenly curmudgeon Himself, constantly watching and assessing us. But one comes with the other and – despite Stephen Fry’s outrage – most people find it hard to drop the lot.

There is a way out of this existential echo-chamber, of course, which doesn’t involve hoping, praying and queuing, fingers crossed, outside the Pearly Gates. This is to reject a God, accept the meaninglessness of life…and just get on with it.

If only it were that easy. Even those of us who profess disbelief, who can’t see through the celestial curtain to whatever lies beyond, have an occasional ‘what if’ moment.

What if there is a God? What if he’s reading my mind, putting me on His List or taking me off it? And if I believed would have to go through this tortuous second guessing every time I have insomnia, or am stuck at the traffic light, or walking on a beach?

There may well be a God. if it’s not each of us, or Stephen Fry, it may – to pick one contender among millions – be Randy Newman.

After all, didn’t He sing: