What I learned from a towering wall of Alpine ice 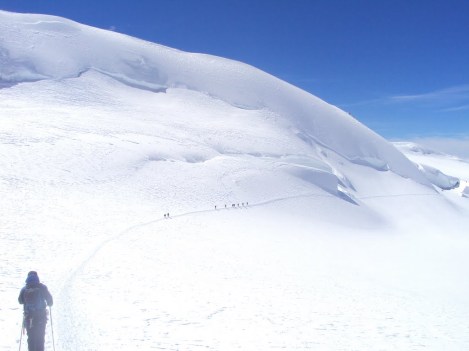 Descending beneath an ice wall on the Parrotspitze.

Mountaineer Joe Simpson called it ‘the beckoning silence of high places’ – the lure that pulls people to the mountains, often to their most dangerous spots.

I’ve been to few places higher, or more silent, than the icy glacier that sits atop the Monte Rosa massif, the mountain chain which borders Switzerland and Italy, a sea of ice flowing down a frozen valley beneath the peaks of the Dufourspitze, Zumsteinspitze and Parrotspitze.

Six years ago this week I traversed the massif, climbing eight peaks in five days and pushing myself to limits I wasn’t even aware of.

Over the course of the week I came dangerously close to losing a glove in high winds on the Zumsteinspitze, assisted in bringing a fellow climber down after he was struck with altitude sickness, and – the payoff for repeated endurance tests – witnessed a series of incredible summit vistas.

I also took not-insignificant risks, one of which is pictured above. The picture was snapped as I descended from the Signalkuppe (4,554m), travelling by a hanging serac wall under the Parrotspitze (4,432m).

At the time the huge mass of ice above barely registered, despite it being mid-afternoon and a dangerous time for avalanches. I’d been climbing for 12 hours. Like the other members of the small group I was with, I just wanted to get down – and the route under the Parrotspitze was the most direct way.

In fact, given my tiredness, light supplies and the hour of the day it was the only option.

Perhaps that’s why the danger never registered at the time – when you’ve a single route forward and no way back it’s pointless to dwell on a concept like risk (or tiredness, or freezing feet, or an unquenchable thirst and a very finite amount of water in your flask).

Afterwards – if there’s an afterwards – you applaud yourself for your bravery, or dig up your photograph and write about it all.

I’m reluctant to draw life lessons from trips to the mountains, but when the Monte Rosa picture popped up on a social media feed this week it occurred to me that risk is a phenomenon that takes up as much space as you allow it to.

If you’re on a single path, to a single destination, it becomes – as it was under the Parrotspitze – simply part of the landscape.

This site uses Akismet to reduce spam. Learn how your comment data is processed.